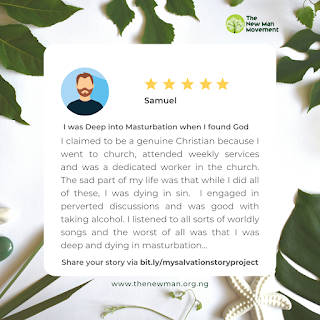 The day I got saved genuinely was a day I can never forget in my life. Before then, I only claim to be a genuine Christian because I go to church, attend weekly activities and I was even a worker in the church. The sad part of my life was that while I did all of these, I was still dying in sin. At the time, I used to engage in perverted discussions and was good with taking alcohol. I used to listen to all sorts of worldly songs and the worst part of all was that I was deep and dying in the sin of masturbation.

I was like that for a long while, yet I claimed to be a Christian.

Read: I used to think Falling under the Anointing was Fake until...

My true salvation experience started when I finished my secondary school and I left for Lagos. I greatly believe that I encountered God because of how much He loves me and because of His great purpose for my life. I believe that God couldn’t just keep looking at me like that, because the devil made sure I was hell-headed on full speed. I came to Lagos and He directed my steps to the house of a man of God and that was how it all started. It happened that I had lost my mum from my very tender age and few months after I got to this man's house I lost my Dad. So I fully became theirs and I was adopted by them. Even to them I claimed to be a genuine Christian and they saw me as one but then my old habits were still there.

Until a particular Monday, I was alone at home working then I began to ruminate on the Sermon the man of God preached on Sunday. I was so captivated that I saw myself as a criminal who has misused the grace of God then  I began to weep. I wept so much when I was gripped by His Love. It was so real that I could literarily feel it. After all I went to take a short nap and while sleeping, He came to me in a vision and spoke to me some words. Words that marked that beginning of my new life in Christ. All He said was “But There’s No Genuine Repentance”. And that was how my journey as a new being started. I went genuinely back to Him and I made a vow, I pledged my allegiance “That Never Will I forsake Him.” And ever since then, I can indeed say HIS GRACE HAS BEEN SUFFICIENT. I never had any reason to look back, I was delivered from the shackles of SIN, He set me free from the grip of the devil and He SAVED me!!!.

PS: This story is a real life experience submitted in the Share Your Salvation Story Project. You can also share your salvation story by clicking here.