Have you for once taken your time to ponder on the reasons many children behave the way they do with regards to not obeying instructions? Imagine a young child of about five was told not to do something, and because his father was always monitoring him, he decides not to do it. But have you noticed that if the child's father isn't there to monitor him, he does the exact same thing he was told not to do? He says to himself or herself, dad is not here to see me, so I can act the way I want to. 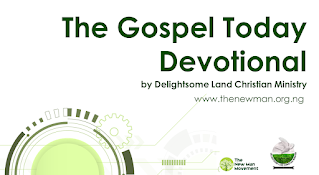 Isn't this the case with many? Many people who claim, and say to themselves that God does not exist, in one or way or the other, have found for themselves reasons or basis why they do the things they do. They say most times to themselves that there's no one to monitor them, and to require at their hands that which they have done, as well as the fact that they do not owe him any explanation for their actions.

Today, as the Lord would be helping us, we shall be considering a very interesting passage in scripture; that which depict the thought in the heart of so many people, and hence, the reason behind many of their actions. It is seen below,

"The fool hath said in his heart, There is no God. They are corrupt, they have done abominable works, there is none that doeth good". (Psalm 14:1).

Can you see for yourself the thought that lingers in the heart of many people? Isn't it  something to be concerned about when one says in his heart there's no God? It should be, why? Because this particular thought is the reason for the many perversions we see in the world today. Many people feel that there's no God, and are not accountable to him as well, and hence, can behave the way they like.

Let's take out time to examine the text, it says the fool hath said in his heart that there's no God, but why are these set of people who have this thought in their hearts referred to as fools? Because they lack the wisdom which the Lord gives to those who come to him, and are not ready to in any way ask for this wisdom so that they can understand who he is, instead of thinking he doesn't exist.  It then says, they are corrupt, they have done abominable works, there is none (among them) that doeth good. As a result of the thought they have that God doesn't exist, they have decided to live  in ways that are not pleasing to him (God), being corrupt, doing things that are not consistent with the nature of God, and not exhibiting any form of goodness since they have denied in their heart that there's no God.

Dear believer, we are not of them that think this way, and our actions are different because we have the wisdom of God, we know who he is, and we know that he does exist, and hence we do that which is pleasing to God, and we act in ways that are consistent with his nature in us. May we continue to live wisely. The Lord help us all.

Only those without the wisdom God gives say in their heart that there's no God. You are wise, and believe that there's God.