The Biography and Full Profile of Pastor Femi Lazarus 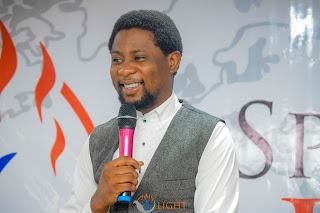 Born on 15th November, Pastor Femi Lazarus is the Lead Pastor of Sphere Of Light Church. He is a Public Health Professional and the Convener of Campus on Fire Conference. Pastor Femi is multilingual, as he speaks Yoruba, English and Hausa fluently with a bit of Igbo language.

An indigene of Ogun State in Nigeria, Pastor Femi Lazarus is a very selfless and  passionate preacher who has a vision of liberating as a mandate from God. He is a seasoned preacher of the Gospel, highly intelligent, dedicated, committed and talented.

According to Pastor Femi Lazarus, his salvation story was quite strange. In his words, "I returned from a night party the night I gave my life to Christ. It was just a simple conversation between me and my Dad. The questions he asked me were assisted by the spirit and that was all God needed to bring me closer to himself. I wasn’t chasing God, God was chasing me!"  The conversion occurred after he had a 'simple talk' with his dad, who he adores greatly and admits plays a huge and significant role in his life. Since his conversion, he has been involved in the conversion of many others through spirit-filled preaching and teachings. One attendance in his meeting and you will feel the tangibility of God's presence. 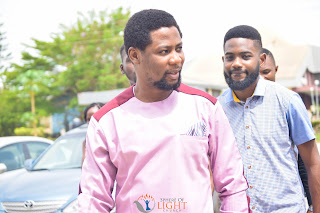 The Visioner of ‘School on the Street’ continues to be a huge influence in the lives of many, both young and old and this was brought to light when he received an award at Royal Awards and Leadership Summit Ceremony organized by the Ooni of Ife Foundation on 18th January, 2020. After receiving this award, He wrote, "The land I had to wait on God to send help to be able to buy pure water worth 5 naira, the same land where I have had to ‘prayer walk’ from campus to campus gate because there was no 20 naira to take bus, God brought honour from that same land".

He is known for honouring fathers as evident in his speeches, teachings and conduct. He has in time past had contact with Fathers of Faith, one is Prophet Olowere, who he and two fellow ministers (Pastor Daniel Olawande and Evangelist Lawrence Oyor) visited days before the Latter Rain Conference organized by the Sphere of Light Church in Obafemi Awolowo University. He is a student of Church History and he recently debunked rumour generally believed about the wife of Apostle Joseph Ayodele Babalola, Pastor Femi Lazarus defended her saying, "She didn't maltreat the God's General as many believe, but locked door against him to rest which the General most times doesn't have because of robust schedule of programmes and ministrations".

The Public Health Professional also holds a meeting called, Campus on Fire Conference which holds in Higher Institutions around the nation, Nigeria. The Conference recently held in The Polytechnic, Ibadan, with strong manifestations of the Spirit.

The Lead Pastor of Sphere of Light Church also runs a free mentorship programme known as Femi Lazarus Mentorship School, of which he wrote, "This is free, it is what I have dedicated my life to do, to lead people and help them become all that God wants them to be". A lot of Youths are beneficiaries of this kind gesture and many can attribute their spiritual growth to his mentorship.

Pastor Femi Lazarus is a strong advocate for balance and accuracy in media and on one occasion where he held an Online Meet-up with Media Influencers, he strongly admonished that the "Media should not commit Adam's error of exaggerating God's instruction and that God is depending on the Media for accuracy and accurate representation". It was in this meeting that he revealed the truth about Apostle Joseph Ayodele Babalola earlier revealed in this write-up.

He strongly believes and teaches that for a man to fulfill destiny contrary to what many know and believe, a man must conquer himself first, not his enemy, which he considers secondary. He also teaches that "your destiny is not stronger than your decisions in life".
Pastor Femi Lazarus is a balanced teacher. He is also involved in training many other ministers and he has been doing this consistently for years. His given mandate is to raise God's end-time army and that is not far from the truth given all that he is doing especially among the young Christian folks.

Pastor Femi Lazarus organises a weekly online Bible Teaching session on the Telegram app to teach the word. He also founded the Slum Education Initiative with a strong passion to get kids to school especially those living with no hope of being schooled.

A graduate of the Obafemi Awolowo University, Ile-Ife, Pastor Femi is happily married to Pastor Miracle Ajala. The duo tied the knot on the 12th of December, 2020. Together, they pastor the Ibadan branch of the Sphere of Light Church.

To download spirit filled messages by Pastor Femi Lazarus, kindly follow the links of message titles seen below with the original ministry website links for you to download to your device. We have collated these to ease your search stress (and will update this list subsequently). We also recommend that you visit Pastor Femi Lazarus' Official Website, or the Sphere of Light Church Ministry's official Website to download other files you may not find here. This is due to our Media Policy on Content Uploads.
These Message Titles are arranged in Alphabetical order too to ease your search. Download, Listen, be Blessed and Share!

As believers, the devil still comes around, trying hard to frustrate our lives and see if we can tu…